Change is the name of the game.  We change looks and ideas around here pretty fast.  Less than two years old and we’re already on v3.0.  This is where we archive the looks of days gone past for EduGeek Journal.  It all started off with the first version:

EduGeek Journal v1.0: News and Views From The World of Educational Technology
We really wanted to be this huge site that collected news and ideas from everywhere around the Internet – a one stop shop for emerging trends and online learning.  That was just crazy.  Only one link works on this archive: the link to the Edtekipedia.  We wanted to start a wiki for Ed Tech, but that just didn’t catch on.  At least with the people we wanted it to catch on with – the spammers loved it.

EduGeek Journal v2.0: The Jaiku Rip-Off
So we decided to go more social and focused on creating a place to try out new technology ideas.  Micro-blogging was prominently featured.  We had fewer areas but cooler looking stuff.  The podcast started in earnest, and then kind of died.

The tabs at the top of this archive do work.  Most of the links do not work, except for the last link to comments on the last post. We liked how the comments on this version could nest, so this is an example of how that worked.

EduGeek Journal v2.5: An Online Community Promoting Educational Technology
We decided to slightly tweak the design and focus more on becoming a community.  Building online communities is hard, and probably not such a draw for our audience (there are so many communities out there already).  Most people seem to like to just read what we have to say, but not really interact or form their 3 millionth communities.

The tabs at the top of this archive also work.  Most of the other links do not work, except for (again) the last link to comments on the last post. We liked how the comments on this version could nest, so this is an example of how that worked.

EduGeek Journal v3.0: Proud Sponsor of Your Future
Finally made the jump to WordPress for this version. Heavily customized a theme I liked, not realizing there was a thing called child themes. Live and learn.

Another idea that we good intentions for… but just not enough time to complete. Here are both episodes that we did manage to make: 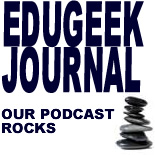 We started out with the idea of making a vodcast of EdTech news.  Not as interesting as it sounds… but we did get one episode made about Second Life.  Here it is in all its poorly-acted glory:

A joke banner I created when the term EduPunk came out.  I was a bit surprised at the number of people that thought our site was really hacked by EduPunks.