Are We Finally Seeing the Equalization of Student-Centered Learning?

Student-centered learning seems to be a love it or hate it affair. I fall on the side of loving it, but I also recognize the difficulties in implementing it. Technology improves our ability to realize the concept, but also falls very short of the finish line. With the rise of the idea of Personal Learning Environments/Networks, I think most people assumed that we finally had technology that was close enough, so they just called it even and moved on. MOOCs were also claimed by the student-centered learning crowd, even though the version that is popular now is not student-centered at all.

But if you were looking in-depth at most PLE ideas/concepts/etc, what you usually saw was something still either slightly or majorly lopsided, leaning heavily towards the instructor to create the space, pull the content together, organize everything, and probably even do some heavy coding on top of all of it. You really still had learning that was always centered on the teacher with several satellites (students) providing the supporting material. Switching the focus of the class on to the work of any student or group of students would have been akin to switching the center of our solar system from the sun to Jupiter – the basic design of reality just didn’t allow for that possibility no matter how much you wanted it to.

A recent post by Jim Groom lays out a newer idea of having the students take on the role of pushing content to courses rather than having courses pull in the content. The technology is not quite there yet, but it is exciting nonetheless. Back when I created this diagram… 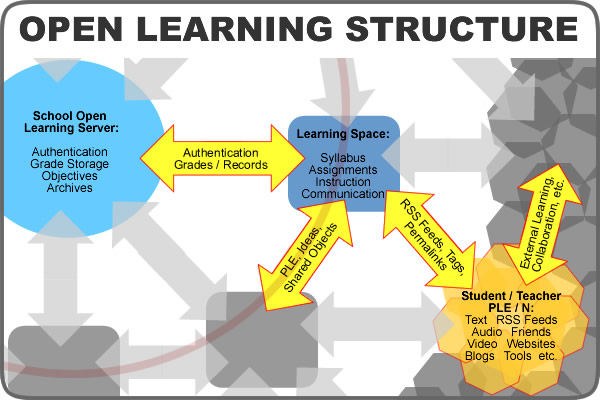 …there were a few parts that I added that I wasn’t too sure of. The main one being the two way arrow between the student/teacher PLN and the learning space. The only way I knew of to push content back to a learning space was to create a Word Doc or a Permalink or whatever and physically “submit” it to and “assignment” area in an LMS. Technically it works, but that is still archaic, segmented, closed, and frankly a pain in the rear half the time. The idea of a student’s website pushing content solves those issues. The second concern was with putting the teachers outside of the learning space and in the cloud of learners. Many want to be there, but if they have to constantly go back to the “Learning Space” to pull in content and keep it running, eventually they will just squat there and pull the focus of the class back on themselves. Push technology allows instructors more freedom to move and stay outside of the learning space, interacting with students as learners themselves.

(I’m still not happy with the “Learning Space” descriptor… “Course admin” is probably more accurate, but I want to avoid the idea of a “course.” It’s probably more of “Admin Buffer” to collect objects of learning to prove to the powers that be that learners deserve the certificate/grade/degree they are earning. The “open learning server” should probably just be more accurately labeled “College/School/Organization Admin” and list other things such as “Certification” as a function. So I guess you can expect to see a v5.3.2 or whatever version I am up to of this diagram, especially since I really need to switch the learners to the center of the diagram and not the side.)

The next thing I would like to see is a way for assignment banks to be shared across courses, in a way that lets instructors mix and match their own categories and submit their own assignment ideas for others to use.

So, anyways, go to Groom’s post to see the technical details and also some of the other ideas and possibilities that others are throwing in there. I have been sending some of UMW’s ideas and projects to the University I adjunct for, but some of you may have more control over actually trying out these ideas… so why not give it a shot and let them know how it goes?

One thought on “Are We Finally Seeing the Equalization of Student-Centered Learning?”